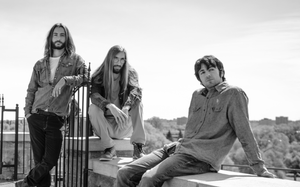 With the release of their new double A-Side, “Good To Me” and “Holding On,” Ottawa roots rockers Tribe Royal have fulfilled a long-held dream of recording in Muscle Shoals, Alabama, one of the major soul music hubs of the 1960s. The sessions—which will also be part of the band’s upcoming sophomore album—were produced by Norbert Putnam, legendary session bassist for Elvis Presley, Roy Orbison, J.J. Cale and others, adding even more historical significance to the project.

But, as seen in their accompanying mini-documentary “Road To Muscle Shoals,” the quartet, comprised of singer/songwriter/guitarists Chris Kerwin and Terry O’Brien, and bassist/vocalist Bram Al-Najjar, faced a few challenges along the way, including parting ways with their longtime drummer (since replaced by Jasen Colson) not long after finalizing plans, and totaling their van when they struck a deer not long after leaving Ottawa.

Having established themselves with their 2016 debut album Colours Of The Sun, the band landed a coveted main stage slot at last year’s RBC Ottawa Bluesfest, followed a few months later by a distribution deal with Believe! Digital. It’s all adding up to Tribe Royal making major strides in bringing their hyper-catchy, throwback guitar pop to the masses.

The “Road To Muscle Shoals” double A-Side is available as a free download now at triberoyal.ca.

FYI: What’s been Tribe Royal’s story up until now?

Chris Kerwin: In January 2014, I had moved in with Terry at his mom’s place for a month or so. We were both unemployed, out of school and had nothing better to do than jam. It clicked, and it worked, and we loved the sound we were getting singing together. Common interests in ‘60s and‘ 70s bands made it fluid and easy to work together. We booked our first shows in Ottawa as a duo and away we went. By April of that year, we had rounded out a full-band with Bram taking up the bass and with our original drummer.

From the outset, we wanted to be different from the bands in our local scene and do things our way. We booked ourselves to play as many shows per month as possible at venues we knew had a consistent live music audience. We’ve probably played about 200 shows in our first three years as a group.

FYI: Was the Muscle Shoals experience everything you hoped it would be?

Chris Kerwin: Absolutely. Having Norbert Putnam at the helm for our upcoming LP is a real boost for us and our morale. He also recommended recording at Grammy Award-winning engineer Jimmy Nutt’s studio “The Nutthouse,” which was amazing. It’s all injected the band with renewed vision and purpose and opened our eyes to what it takes to continue to grow. It feels like things are starting to take off for Tribe Royal and the opportunity isn’t lost on us. Humble and hungry are great words to describe the feeling in the band right now. We want to raise the bar and put out a world-class production, and with the incredible team we have around us we believe this is possible.

FYI: What song in your catalogue means the most to you and why?

Bram Al-Najjar: For me right now it’s a new song we have called “Light Up My Life.” There’s something about the melody line for the chorus that sticks with me; there's this magic to it.  I suppose we can all say that the song hasn't reached its full potential yet, in terms of the recording, but I hope it will soon. It’s also a ballad, which I’m into. I'm a pretty lovey-dovey guy, so they profoundly speak to me.

FYI: What's been the most significant change in your life over the past year?

Terry O’Brien: I would say hands down the biggest change came last November when Entertainment Music Group in Toronto picked us up. From the beginning, the partnership felt like a gust of fresh spring air clearing out the stagnant energy that had built up. Sandy [Graham], along with the other integral members of the EMG team, Don [Graham] and Lenny [Stoute], helped us to get organized and focus on what we needed to focus on.

After the initial reorganization, we started making some pretty huge connections. Sandy got our music to Norbert Putnam and Don, having recorded with Norbert earlier that year, recommended us. When we got the call in early February that we would be going down to Muscle Shoals, Alabama we couldn’t believe it. Here we were, just a few kids from Blackburn Hamlet going to record with one of the original Swampers. We were where it all started, the hit-making capital of the world, on the cutting floor with the man himself.

Terry O’Brien: One that springs to mind happened in Halifax when we had to get a different Air BnB than the one we’d previously stayed in. The moment we arrived at the new place we could tell that something was off. The last place had been squeaky clean, and this new place looked like a dump. The lawn was overgrown, the windows had been partially blocked out, the paint was flaking off the exterior, and on top of all that, there were people coming in and out constantly. Just as we parked our trailer in the driveway, a neighbour crossed the street and asked us if we “knew about this house.” She began to explain that it was under investigation and that we should consider other options because at any moment the police could show up and search the place. We were in shock and just laughed at the situation.

As we went inside, we decided to look up the case and sure enough, a video popped up on CBC. Eerily, the first scene opened exactly where we were sitting at the front entrance. It went on to show the rest of the house and the disrepair that awaited us. It turns out that the owner had been illegally housing students for super cheap rent. It seemed as if over 20 people were living in the place. Later that evening we had a run in with a disgruntled neighbour. He had been drinking and was enraged by the sight of our trailer. After nearly getting into a fight with this deranged lunatic yet another neighbour explained to us simply, “that’s Steve.” Halifax proved to us yet again that it was an interesting spot to visit.