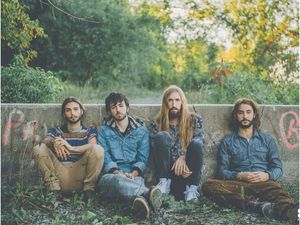 The sound: A mix of modern and vintage-inspired rock with elements of folk and Americana.
The story: Born from the partnership of Terry O’Brien and Chris Kerwin, two aspiring songwriters, and their shared interest in the musical giants of the 20th century. The foursome was filled out in early 2014 and from then on it’s been lots of performing, recording and travelling.
Highlight: “From headlining a show at the legendary Horseshoe Tavern to working with celebrity stage coach Tom Jackson to a soldout show at Barrymore’s, we always look forward to getting on the road and meeting new people while on tour.” Lowlight: “One of the lowest points for us was when we returned from our first major tour in 2015. … Long days in close quarters, flat tires, grey skies, low turnouts, along with the sleepless nights took their toll.”

Best Bluesfest memory: “The Chili Peppers last year. We planned to meet friends on the grounds before the show, but it was absolute madness with record-breaking attendance and it was nearly impossible to find anyone else. Just as the first notes from the band rang out, everyone magically appeared from the crowd standing in a big circle staring at one another. It really was a scene out of a movie.”