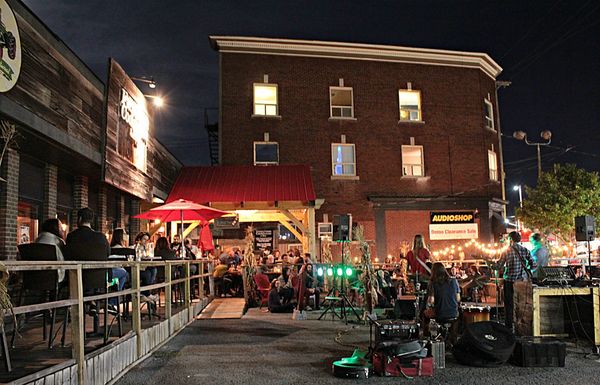 Friday and Saturday during Cityfolk boasted some amazing Ottawa talent featured as a part of Marvest… a showcase series organized by the festival. Several Bank Street businesses were the site of these shows, and on Friday night, I dropped by FarmTeam Cookhouse to catch a couple of our local artists, the first one being Tribe Royal.

Outside on the restaurant’s large patio and parking lot was where it was all happening, looking every bit like a vibrant campground scene with Adirondack chairs and tables scattered below the raised porch area, and the band set up on a section of the parking lot. A four-piece indie band, named Tribe Royal, had just started their set and the music grabbed me instantly.

Their sound covered a diverse spectrum of rootsy alt-rock flavours that delved into off-shoots of country, blues, folk, and classic rock. Laid back, easy listening, and dance inducing, every song delivered a feel-good vibe, and completely memorable melodies with catchy hooks.

“Blood Red Rose,” a song about travelling and being out on the road, had some of that country/folk Blue Rodeo goodness, as did one of their newer pieces, “Sunset Band,” which had some nice changes into the bridge, and great 3-piece vocal harmonies during the chorus. Their current single, “Wasting Time,” triggered some hand-clapping from the audience, with its uplifting rhythm and melody. The band also showed some great stage interaction, which turned the warm fun factor up a notch. “My Kind Of Girl,” “Catching Up” and “What You Do To Me” were laced in an infectious 60s psychedelic pop-rock flavour, reminiscent of bands like The Zombies. I enjoyed the Alice In Chains rawness of “Serpent Queen,” and the very Chris Isaak feel of their three-quarter timed set closer, “Don’t You Change,” which had a gorgeous flowing vocal melody.

Look for Tribe Royal’s new album, Colours Of The Sun, coming out October 17, 2016. Visit their website at www.triberoyal.ca.