Go To: Westway LAB Festival 2019 - Day 3: when the city-crib gets Canadian outlines 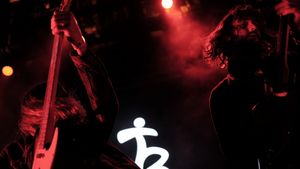 Canada was the country chosen for the Country Focus of this year's Westway LAB - by 2018 it had been Austria. As such, the evening concerts at the Vila Flor Cultural Center Auditorium, Patio (stage set outside the auditorium and Café Concierto) and Box (the backstage of the auditorium where Jacco Gardner performed two days ago) focused on (there was also space for the Why Portugal Event, which, like last year, will be published in a separate annex of this article).

Sarah MacDougall is the first of this American family to act. From guitar to shoulder and backed up by a musician who split up between drums and keys, the Swedish-born artist based mostly in Yukon, Canada, almost next to Alaska, tells us stories of houses in the woods, hungry bears, cowboy boots, the fear of taking to the streets and many other events that, transcribed for a script, would give a good film, with soundtrack guaranteed.

Stuffed with experiences to share was also Megan Nash . A native of Mortlach, Saskatchewan, the artist served, alone on stage (voice and guitar), experiences directly and indirectly linked to dislikes of love.

The backstage of the Auditorium, called Box, seems increasingly to want to take on the role of multipurpose space. If on Wednesday Gardner was entitled to a quadrangle configuration, acting even in the center, yesterday's performances saw the stage mounted in an orientation perpendicular to the auditorium, that is, and now back in time, in a rotation of 90 degrees relative to that hosted the performance of Manel Cruz in 2018. Tribe Royal , from Ottawa, a few miles from Montreal, made the Box their home, with rock sonorities that put several to dance in front of the stage.

Divided between drums, bass and two guitars (the men of the string instruments also using other chords, the vocals) the Tribe Royal are almost always in the vicinity of the border with the United States, which leads, from time to time, put a foot on the other side and serve a song with boundaries cross-border, as an example of "Holding On", through which we are invited to a trip to Alabama.

The Canadian artists chosen for this kind of cultural exchange are, as a rule, very good performers . The Deuxluxes , band that acted in the Auditorium of the CCVF, are an excellent example of this. The duo, composed of Etienne Barry and Anna Frances Meyer, who put a few phrases in Portuguese here and there, serve as an energy-packed concert (she's on guitar and vocals, he's on guitar , voice, drum and snare drum), asking people to get up from their chairs and approach the front line. In one of the themes, they invite a descent into the Mexican desert and soak up the sounds that stimulate hip movements, in the image of the dances that Anna performs during the whole performance.

Following are The East Pointers , a trio from Prince Edward Island, located off New Brunswick and north of Nova Scotia. Inspired by traditional Celtic music but with a modern approach, the collective formed by Jake Charron (guitar) and cousins ​​Koady (banjo) and Tim Chaisson (violin) knew how to serve in the Patio a cohesive concert, loaded with talent and full of good energies. They talk about the fact that they are a very large family and that we are likely to meet one of their cousins ​​if we ever go to Canada, and they still praise our climate, saying that the cold one feels like in an April night in Guimarães, for them it's nothing - to point out that the audience is all encasacada while Tim presents himself in t-shirts as if this were a hot August night.

One of the highlights of the conference of the third day of the Westway LAB 2019 was precisely, we are now back until the early hours of the morning, the guest country panel. The session brings together a number of Canadian bodies, all directly linked to the industry. The first block of talk works almost inviting Portuguese artists to play in Canada. Helpful advice is shared, such as trying to choose the best and most profitable touring circuit. "Canada is a giant country," they say. "If they do not choose the right route from the south, together with the United States, they may end up going to distant places that entail 16 hours of travel, something that is unbearable when you want to give concerts every day." There is even a region that is a two-day trip from Toronto.

Among the aspects related to the music industry and other curiosities related to Canada, two videos of two events are projected in very different places. The first on M Pour Montreal, a four-day festival held in what is the largest city in the province of Quebec, with excerpts from performances by Death Grips, Mac DeMarco and Of Monsters and Men, among others. The second on Canadian Music Week, a four-day event that holds concerts and conferences in Toronto, Ontario, with live footage of Deadmau5, Nelly Furtado and Tegan and Sara.

There followed a session led by David Ferreira , one of the faces of the unforgettable Valentim de Carvalho. The businessman brought with him a presentation that turned, as would be expected, around the music industry. It begins by showing a PowerPoint with the various interconnections that the market can have, from the artist creates the song until the public consumes it, then pouring into the bodies responsible for collecting and distributing sales revenues. "There are two things that flow through this whole process, do you know what they are?", Launches to the audience. Money and communication, it concludes. No matter how good the product is, it only reaches the right place with money invested and a good communication strategy.

Nephew of Rui Valentim de Carvalho, historical editor of Amália Rodrigues, David Ferreira has worked with some of the most renowned artists in Portugal, which gives him extensive experience in the field. And this know-how is evident as he draws, through words and stories anchored to the slides he displays, the chronology of the recording industry, from the times of the drum recorders to the present day, concluding that there is no past watertight and isolated but rather a constant evolution of distribution methods and storage formats of content, be it physical or digital. Interesting point of view.

The day began with a conversation between Ana Rita Feijão , responsible for digital distribution Level: UP, Marc Antoine Rousseau , representative of Deezer, streaming service launched in 2007, and Wesley A'Harrah, founder of Hyper Orange, a New York-based consulting firm that provides services in the digital marketing arena. Several questions related to digital sales and distribution were addressed, with Wesley highlighting three points that he considers fundamental for an artist to launch on the online platforms: creating a smart link in Linkfire, to achieve an omnipresence from all services; look for a business manager, thus ensuring professional follow-up and advice; work with Google Analytics and associate a tag with the Linkfire page - this latter process, "well-timed and fine-tuned, can generate good money," Wesley said.

This was the third day of the West Summit. Tomorrow there is more.